The Minoan realm did not just consist of palaces: it was a thriving economy and Minoan remains are to be found everywhere. There are many major towns – the palace at Knossos lay to one side of a huge Minoan town, and in the countryside there were numerous buildings that are sometimes misleadingly called villas. Ian Swindale in his magisterial website on Minoan Crete lists 19 towns and settlements and no less than 15 mansions and villas, but these are probably the tip of the iceberg of the extensive settlement of Crete in Minoan times. Let us take a quick look at some of these towns and country estates that tell us where people actually lived in Minoan Crete. 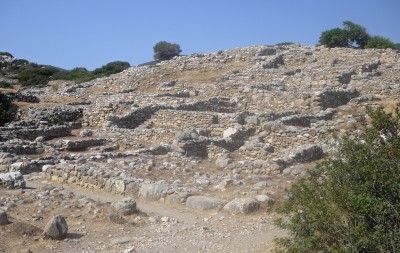 Gournia – view from the entrance, looking up the hill across the town

The best known Minoan town is Gournia which lies at the eastern end of Crete between the palaces of Malia and Zakro, and was excavated between 1901 and 1904 by a formidable American lady, Harriet Boyd. (It is amazing to think that the Minoans were discovered in a very short period of time in the first decade of the twentieth century, when the English under Arthur Evans were digging at Knossos, the Italians were excavating at Phaistos and the Americans were uncovering a Minoan town at Gournia. This was the time when Crete was throwing off Ottoman rule and discovering its independence – and its history). 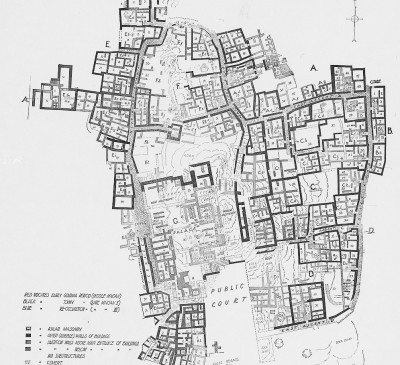 Harriet Boyd’s plan of the Minoan town of Gouria. The visitor enters centre-left, wanders around the main road in an inverted U to arrive at the Public Court – possibly the Palace, centre bottom

The amazing thing about Gournia is that the entire town was excavated. It appears that Harriet Boyd, a lady in her early thirties, was exploring in eastern Crete, and having been taken by a local to Gournia recognised its potential, did a quick trial dig with just 30 local workmen and then returned for three proper seasons, digging with a hundred workmen at a time. One wonders how she managed to pay for it all (private money?), while all the time admiring how safe it was in a countryside which was still in the process of escaping from Turkish bondage. 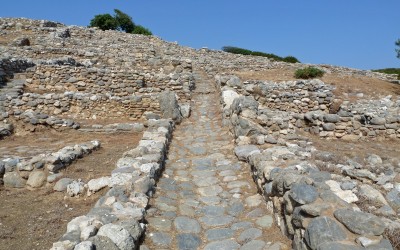 The Main Street through the town of Gournia

The town consisted essentially of small houses set on either side of a ring-road that ran around the base of a low hill. It was a paved road barely wide enough for two donkeys to pass each other. Many of the houses appeared to have been two storied, some of them with evidence of industrial activity including bronze working. The excavator remarked that they were mostly larger and more commodious than the contemporary Cretan peasant houses (but then Crete did not thrive under the Ottomans). ‘Farming, pasturing, fishing, building, weaving, shoe-making, bronze-casting, the manufacture of stone and terra-cotta vases occupied the people’s time’ wrote Harriet Boyd. 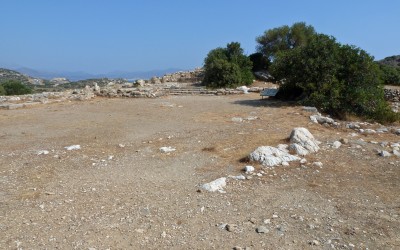 The open courtyard at the top of the town of Gournia: was this a Palace?

In the possible Palace at Gournia. Note the ashlar masonry on the right, that is stone that had been cut into regularity indicating that it had been part of a posh building.

At the top of the hill however there is a more elaborate building and people have been arguing ever since as to how far it was a palace. It was certainly quite grand in parts. In places there was evidence for ashlar masonry (that is cut masonry), though it seems to abut onto dry stone walling. There was a row of magazines for storage purposes and there were several examples of pier and door uprights which usually indicate the presence of a ritual Minoan hall. At the centre there was a small courtyard but it would certainly not have been big enough to indulge in bull leaping, and although the western wall had in places a series of recesses that normally mark the entrance to a palace, there is no sign of a western courtyard. So if the criterion of a palace is that it should have a courtyard big enough for the great palatial ceremony of bull-leaping could take place, then Gournia was certainly not a palace.

The biggest town in Crete was in fact at Knossos, for the palace of Knossos was surrounded by a very extensive town, or rather it lay at the south eastern corner of a very extensive town. The town was later covered by a Roman town: fortunately the site of the palace was largely ignored by later occupation, but the Roman remains at Knossos have been spasmodically excavated: there was a basilica and a theatre, but the prize of the Roman remains is a rich town house with a very fine mosaic of Dionysus. It would be a fascinating exercise to explore Roman Knossos, for it lies basically in the open countryside. When the Arabs invaded Crete in 824, they founded a new town on the coast which is today Herakleon, the capital of Crete, 5 miles to the north of Knossos, so as a result the old town at Knossos was abandoned. The Roman town therefore survives well, but if you want to explore the Minoan town, you must first explore the Roman town: the Minoan town is likely to remain safe from the archaeologists for the foreseeable future. (Though current surveys suggest that the town was even larger than is generally realised)

There are several other Minoan town sites that have been excavated, the best known being Palaeokastro in eastern Crete near the palace of Zakro, where a long length of a winding street has been excavated with houses on both sides. But no sign of a palace has been located: did depend on Zakro only ten miles away?

Were there in fact any other palaces in Crete? The most favoured claimant is at Chania, at the western end of the island. Certainly there should be a palace somewhere in western Crete and the answer seems to be that it lies under the modern town of Chania where numerous finds in bits and pieces over the years have suggested a palace, but they have not yet come together to provide an actual plan of the palace. The best current claimant to be a palace is at Galatas which was only discovered and excavated in the 1990s, but where there appears to have been a courtyard big enough for a wild bull to be let loose, and where both eastern and northern ranges have been at least partly excavated. Several other sites – Archanes, Petsas and Iraki have been named as possible. There was probably a range of princes and dukes who all tried to imitate the grand palaces at Knossos and at Phaistos, though most of these ‘palaces’ appear to have been short-lived.

Then there are the country houses – English archaeologists tend to call them villas, but the term tends to have overtones of ‘Roman villas’, so it is perhaps safer to call them mansions. The grandest example is at Hagia Triada a couple of miles from Phaistos which has building techniques almost as grand as Phaistos and it has sometimes been suggested that it was a summer palace for the rulers of Phaistos. Similarly at Knossos itself there are the buildings known as the Little Palace and the Unexplored Mansion (since explored).

The mansion at Nirou Khani

A good example is Nirou Khani on the coast just east of Heraklion, which was excavated by Xanthoudides in 1918-1919. This has several features of palatial architecture: there was a Minoan hall with pier and door slabs, and a possible lustral basin. There was lots of evidence for ritual with several double axes made of bronze and over 30 examples of the stone features that are often called altars. But there are many similar mansions to be found in Crete.

Nevertheless, at the beginning of the New Palace period, many of the mansions or villas did begin to take on some of the aspects of a palace – the Versailles effect as it has been called, with pier and door settings, and the appearance of ‘Minoan halls’. We must suspect that local rulers were trying to improve their position, — though whether they were the rulers from a local dynasty or someone sent out from Knossos, we shall never know.

But in addition to the towns and the mansions, the main settlement of Minoan Crete must have been the small farms on which its wealth depended. Archaeological surveys of the island have revealed many pottery scatters indicating settlements of various sizes, but none of these has yet been excavated or rather has not been excavated in sufficient detail to become a classic example. But this was where the olives were grown and the sheep were kept and the wool was woven on which Minoan Crete grew rich; and grew rich it did.

On to: Tombs and Religion