So far we have omitted the big problem of Minoan chronology, the problem of the dating of Thera.  Thera, or Santorini,  is an island 60 miles north of Crete – to the modern tourist it is the southern most of the Cyclades islands and the end of the tourist boats from Athens.

Thera is the remains of a huge volcano. The island, centre right is the centre of the volcano, and the rim can be seen both in the foreground and in the far distance. 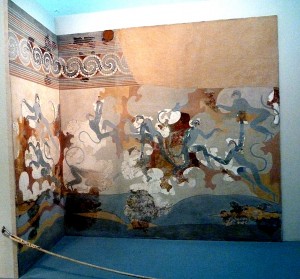 Thera is a volcano and in 1628 it exploded, sending tens of thousands of tons of dust into the atmosphere. Thera consists of the top part of a caldera of a huge volcano, the central part of which is submerged, and today the steamers sail into this central part and hover inside the volcano, while the tourist buses then crawl up the zigzag road to the present day rim on which the idyllic modern tourist resorts are situated.  In the Minoan period there was a settlement on Thera known as Akrotiri which was buried beneath the eruption and thus preserved like Pompeii and has recently been excavated.  The culture of the settlement was very like that of the Minoans, and it has often been considered to be a Minoan ‘colony’ — indeed the wall paintings from Akrotiri provide by far and away the best examples of Minoan art.

Thera: one of the frescos from Akrotiri showing lady in flounced skirt, now in the Thera museum

But the explosion was so violent and sent so much dust up into the stratosphere that the weather around the world was affected.  When the dust fell over Greenland, it was preserved in the ice layers which have been studied by modern scientists, and in Ireland the dust cloud had such a disastrous effect on the climate, that for several years the oaks did not grow and there is a phase when the tree rings become very narrow.  And the narrowing of the tree rings and the similar dating of the ice cores in Greenland can both be dated to 1628 BC — precisely.

Spouted vessles of Minoan type now in the Thera museum

Inevitably the explosion also had its effect on Crete.  In 1939 Professor Marinatos argued that it was the explosion of Thera that brought the palace civilisation to an end, but this was clearly wrong. The pottery found in the ruins of Akrotiri on Thera comes in the middle of the pottery sequence in the Palaces. In terms of pottery chronology, the explosion of Thera must lie between LMIa and LMIB. In LMIb, a ‘marine’ style comes into fashion, when pots are decorated with marine creatures, but this marine style is not found in the settlement of Akrotiri on Thera, so the eruption must have occurred sometime towards the end of LMIa, while the Palaces did not collapse till the end of LMIb.

In the conventional dating, LMIa was correlated with the early part of the 18th dynasty in Egypt (1549-1479), so when the scientific dates were first revealed in the 1990s there was chaos in the scholarly world as the two dates were over a century apart.  Radiocarbon dating however, though less precise, has on the whole agreed with the long chronology.  A distinguished archaeologist Sturt Manning wrote a learned book A Test of Time examining the problem from every conceivable aspect and decided that the linkages with Egypt (and Cyprus and the Levant) were all weaker than had been thought and can be pushed upwards.  The problem remains that in the long chronology,  LMIa begins around 1650 and LMIb ends around 1500 or 1450 with the destruction of the palaces, and 150 years seems too long for what should be a fairly short period.  Arguments are still raging but I have generally followed the long chronology based on the 1628 date for the eruption of Thera.